Koshi no Kanbai is Japan’s most famous and sought-after sake. Its “winter plum” label is familiar to enthusiasts everywhere, conjuring up the image of a sake so perfect that every single molecule seems immaculately in place.

Even as a young man, Shogo Ishimoto’s knack for making exceptional sakes was apparent. Totally focussed on his vision of sake excellence, he had produced a ginjo sake in 1946, an incredible feat at a time when both rice and sake were strictly rationed. In the years that followed he continually tested and refined his vision. Drier and cleaner than the sweet, heavy sakes of the day, Koshi no Kanbai eventually set the model for other breweries in the region, leading directly to the development of the Niigata style.

In the 1960s, the sake trade was completely dominated by big breweries in Kobe and Kyoto, and regional breweries had almost no distribution outside their home prefectures. This changed when mention of the astonishing sake from Niigata began to appear in Tokyo newspapers and weeklies. Some Ginza clubs began to place orders. Before long, other regional breweries were able to enter the Tokyo market, and the “Sake Boom” of the early 1970s got well and truly underway.

Many people are content to buy Koshi no Kanbai because of its name value. That’s a shame, for the daiginjo and ginjo labels take sake brewing technique to the limit and sometimes beyond. It is very difficult to find words to describe a sake like “Chotokusen,” the brewery’s rare daiginjo label, which seems to elude all efforts to categorize it. “Appreciating this complex sake is more in the nature of an intellectual exercise,” wrote one critic. “Each taste asks the sake drinker more questions than it answers.” 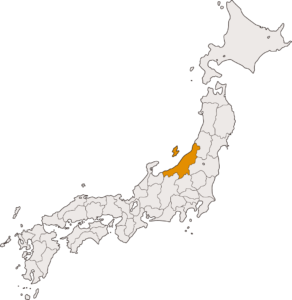